World Premiere of The Sultan and the Saint Receives Enthusiastic Reviews 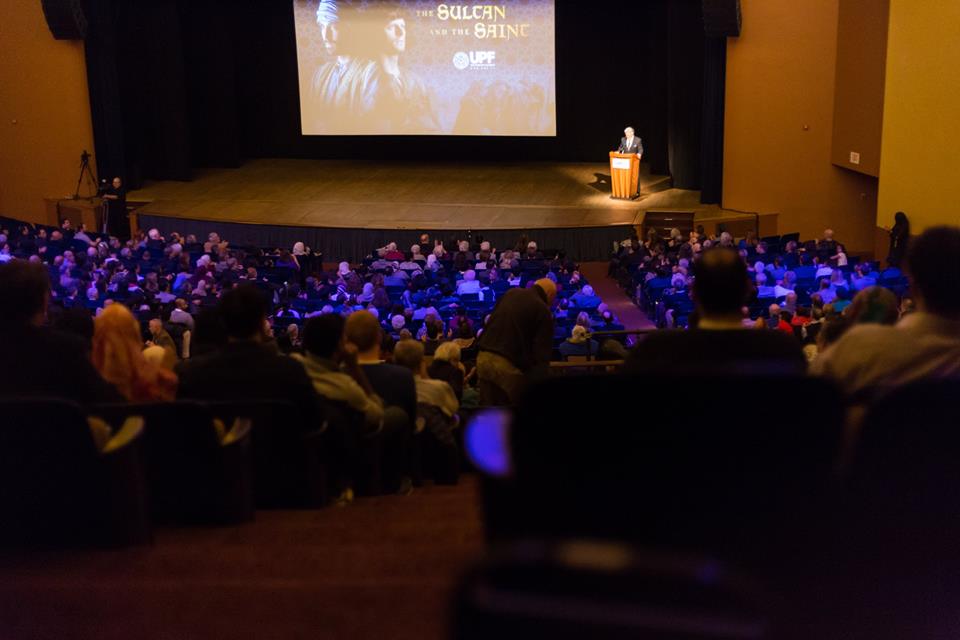 On Saturday evening, November 12, the Lisner Auditorium of George Washington University in DC was filled to capacity, close to 1,400 people, for the world premiere of the UPF docudrama, The Sultan and the Saint. Even before the film was shown, there was high energy in the auditorium, with Muslims and Christians meeting and greeting each other in eager anticipation. They were not disappointed, and highly praised the docudrama which many attendees said afterward is sorely needed at this moment in U.S. history. It was especially gratifying for FAN and the Sisters of St. Francis of Philadelphia, when, before the film was shown, UPF presented a Peace Award to Sr. Marie Lucey “In appreciation for compassionate service beyond your faith tradition.”

FAN worked closely with UPF for two years to promote the docudrama, and will continue to promote the film as it is shown in many cities around the country and encourage attendees to use resources provided by UPF, with FAN’s collaboration, to enable discussion and encourage service projects. Be sure to check out more photos from the premiere on UPF’s Facebook page.

A sampling of responses to the premiere indicates the enthusiasm of the audience.
“The courageous encounter of Sultan Al-Kamil of Egypt and Francis of Assisi is a perfect example of the kind of active nonviolence that is both a way of life and a powerful peacemaking tool. The interaction of Muslim and Franciscan experts with the drama itself throughout The Sultan and the Saint added historical context that is often missing from this important story. Excellent!” –Marie Dennis, Pax Christi

“I was delighted to attend the world premiere of the Sultan and the Saint. The film portrays the remarkable spiritual encounter and commitment to dialogue, understanding and peace by Francis of Assisi and the Muslim ruler Al-Malik al-Kamil in 1219. This film is a wonderful tool for people serious about interfaith and intercultural dialogue to come together to view, reflect and discuss. It’s a “must see” for those seeking greater unity and peace in our world.” –Kathy Dougherty, OSF, Congregational Minister, Sisters of St. Francis of Philadelphia