Who was St. Francis?

St. Francis of Assisi, Italian San Francesco d’Assisi, baptized Giovanni, renamed Francesco, original name Francesco di Pietro di Bernardone, (born 1181/82, Assisi, duchy of Spoleto [Italy]—died October 3, 1226, Assisi; canonized July 16, 1228; feast day October 4), founder of the Franciscan orders of the Friars Minor (Ordo Fratrum Minorum), the women’s Order of St. Clare (the Poor Clares), and the lay Third Order. He was also a leader of the movement of evangelical poverty in the early 13th century. His evangelical zeal, consecration to poverty, charity, and personal charisma drew thousands of followers. Francis’s devotion to the human Jesus and his desire to follow Jesus’ example reflected and reinforced important developments in medieval spirituality. The Poverello (“Poor Little Man”) is one of the most venerated religious figures in Roman Catholic history, and he and St. Catherine of Siena are the patron saints of Italy. In 1979 Pope John Paul II recognized him as the patron saint of ecology.

Son of a wealthy cloth merchant, Francis was a recognized leader of the young men of the town. In 1202 he took part in a war between Assisi and Perugia, was held prisoner for almost a year, and on his release fell seriously ill. After his recovery, he returned to Assisi where he dedicated himself to solitude and prayer so that he might know God’s will for him.

In 1220, Francis sent out a Letter to the Rulers of the People, the text of which encouraged civil authorities to be mindful of Gospel truths. Our work at FAN follows this example and we encourage you to read it. 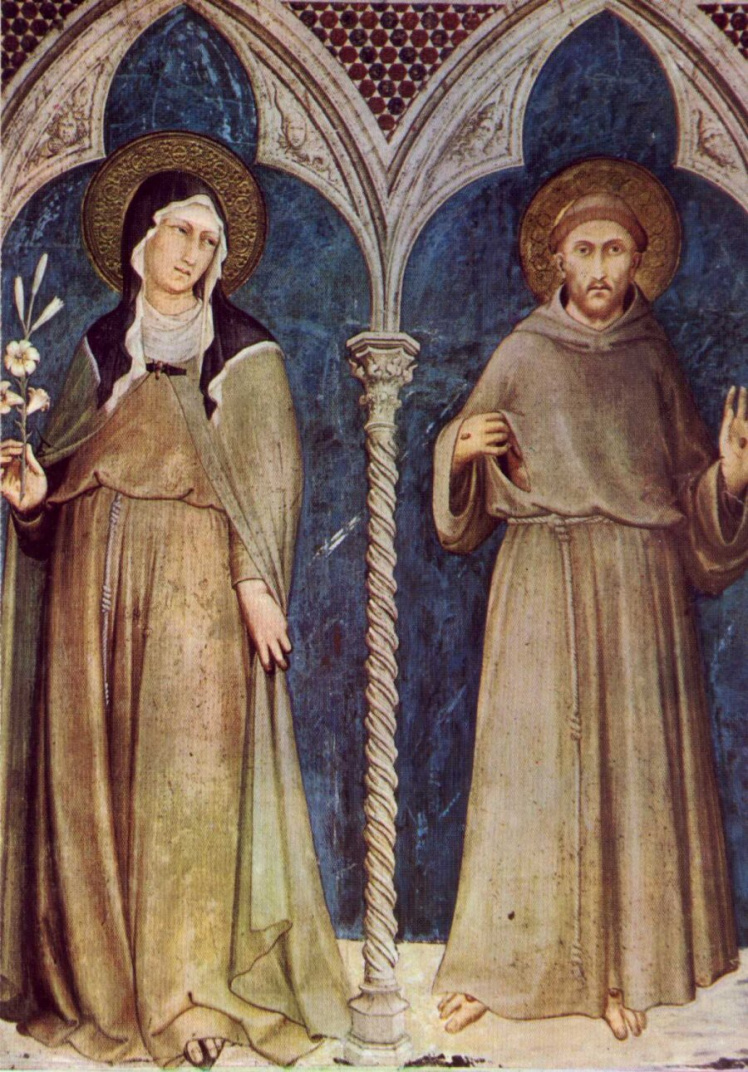 “When I was in sin, it seemed too bitter for me to see lepers. And the Lord Himself led me among them and I showed mercy to them. And when I left them, what had seemed bitter to me turned into sweetness of soul and body. And afterwards I delayed a little and left the world.”

Who was St. Clare?

Saint Clare of Assisi (16 July 1194 – 11 August 1253, born Chiara Offreduccio and sometimes spelled Clara, Clair, Claire, Sinclair, etc.) is an Italian saint and one of the first followers of Saint Francis of Assisi. Francis consulted her, especially when he was discerning between becoming a hermit and being an itinerant preacher. She founded the Order of Poor Ladies, a monastic religious order for women in the Franciscan tradition, and wrote their Rule of Life, the first set of monastic guidelines known to have been written by a woman for women. She valiantly thwarted every attempt by many successive popes to impose a rule on her order which weakened the radical commitment to corporate poverty she had originally embraced. After her death, Pope Innocent IV confirmed that Clare’s rule would serve as the governing rule for the Order of Poor Ladies. Also following her death, the order she founded was renamed in her honour as the Order of Saint Clare, commonly referred to today as the Poor Clares. Her feast day is on 11 August.
Read more about St. Clare

Franciscan spirituality has always involved both contemplation and action.

St. Francis proclaimed the gospel of compassion and care for creation while living in solidarity with the poor. He also spent months in the mountainous forests above Assisi, praying in deep contemplation, often in caves and abandoned places.

Franciscan ways of viewing God and God’s action in history has been a theology that was always orthodox with other parts of Christian theology and yet, at the same time, featuring a different set of emphases. Whereas Christianity has often overemphasized “the stain of original sin,” St. Francis and Franciscan theologians lived and preached and wrote about the many ways that creation is good and the life we have been given is a joyous opportunity. Fr. Richard Rohr OFM, a widely acclaimed author, names the Franciscan way an “alternative orthodoxy” with its different set of emphases while not trying to fight about doctrines.

The Franciscan emphasis on the goodness of God and creation has many ramifications. Creation is the outpouring of God’s love into the universe. Creation reveals to us God’s love for us and God’s beauty (which is why Franciscans call creation “the mirror of God” and that God has two books of creation—Sacred Scripture and creation). And the faith in a good God has implications for the Incarnation and salvation history. The Word of God became incarnate not because the world is full of sin, but in order to transform the world into a communion of love centered in Christ. Blessed John Duns Scotus (c. 1266 – 1308) wrote that the Incarnation was part of the plan all along, with creation a prelude to much fuller manifestation of divine goodness in the Incarnation.

From a more positive way of thinking about God and creation, we can see the world from a different consciousness. Francis and the Franciscans honored the world around them and were ignited in praising God from their experiences. They did not split the world into that which is profane and that which is holy, but could see God in the dirt and the worms, in the suffering of life, and in the leper. The Franciscan way of seeing moves us away from dividing up the world in the good and the bad which, as Sr. Ilia Delio says, is “always capable of identifying God’s absence, but rarely consistent in affirming God’s presence in everything that is.” Francis was able to see God imbedded in a marvelously interconnected world with God as the source of each and every thing. He saw the world in universal kinship, with the moon, the water, and the birds as his sisters and the sun and the wolf as his brothers.

“My soul in an excess of wonder cried out: ‘This world is pregnant with God!’ Wherefore I understood how small is the whole of creation- that is, what is on this side and what is beyond the sea, the abyss, the sea itself, and everything else- but the power of God fills it all to overflowing.”

Broadly, the Franciscan way is to live knowing that all of creation is the place to encounter God. Concrete manifestations involve living more simply on the earth and with other people in order truly experience and savor God’s gift of life.

The things of this world are God-like just as they are and reveals God to us in their specificity. Therefore, to deepen our relationship to God we need regular, attentive contact with the world in its simple, humble state. We can forget about a search for things and people that are worthy of love or that will make us happy. The world is full of signs of God’s presence, with God telling us what we need to hear through the bits and pieces we encounter in a day. In an ongoing way we are converted to the gospel through God’s daily work inside and outside of us.

Francis’ first biographer, Thomas of Celano describes the way of Francis like this:
Who could ever express the deep affection Francis bore
for all things that belong to God?
Or who would be able to tell
of the sweet tenderness he enjoyed
while contemplating in creatures
the wisdom, power, and goodness of the Creator?
From this reflection
he often overflowed
with amazing, unspeakable joy
as he looked at the sun,
gazed at the moon, or observed the stars in the sky.

St. Francis welcomed a married couple, Luchesio and Buonadonna, into the Franciscan movement and wrote a rule from which they could draw inspiration and order for the Franciscan life. They were called Brothers and Sisters of Penance and lay Catholics for nearly 800 years have made a life commitment and become members of what is called the Secular Franciscan Order (‘secular’ meaning that we are embedded in the world). There are some 15,000 Catholic Secular Franciscans in the US, and about 400,000 around the world. Episcopalians formed the Third Order Society of St. Francis in 1950, and other Christians have joined the Franciscan movement since then.

Lay Franciscans have made a mark on history for social justice along with many amazing sisters and friars. Anyone interested in learning more can call 1-800-FRANCIS to be directed to the nearest fraternity. Our Lay Franciscan Champions of Justice Series currently features Matt Talbot among a list of lay Franciscan women and men that include Dante, St. Thomas More, St. Elizabeth of Hungary and St. Elizabeth of Portugal.

Franciscan Prayer
from National Shrine of St. Francis of Assisi

Shareable
great ideas on how to share in your community

Subscribe to receive FAN email updates and donate to support our work:

Get Email updates
Donate to FAN