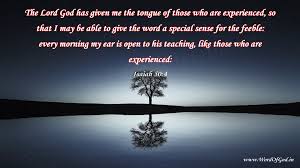 How many times I have envied the prophet Isaiah:

“The Lord GOD has given me
a well-trained tongue,
That I might know how to answer the weary
a word that will waken them.” (Ch 50)

Many times I am either tongue-tied at times when my speech is needed as a balm, or I speak up impulsively and then regret it.

Just last week, a former colleague reached out to me on social media, asking whether someone we know had publicly recanted some offensive things said more than 10 years ago. That person is now imprisoned in a foreign country and suffering serious human rights abuses, so I interpreted the question as meaning that my colleague was reluctant to stand up against the abuse because of the offensive remarks from the past. I reacted quickly and rather sharply, suggesting that the principle of standing up for someone suffering abuse should be more important than whether or not that person recanted unfortunate remarks made long ago.

But that is not what I should have done.  I should have taken my time, cooled down from my initial reaction, and patiently engaged with my former colleague with a full belief in his good intentions. Due to my hasty response, we had to have many exchanges before we got past our misunderstanding and patched up our relationship.

When will I learn the power of my speech? Lord, give me a well-trained tongue!