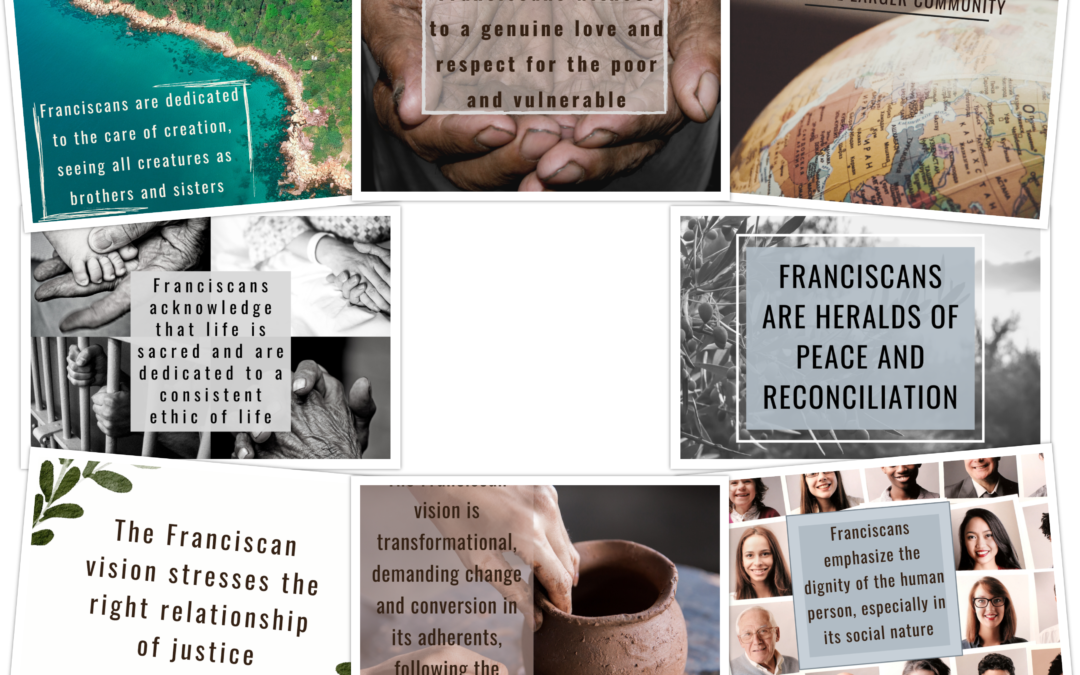 When Franciscan Action Network (FAN) was founded in 2007, a set of Franciscan Values was developed by Fr. Thomas Nairn, OFM. These were set as a guide for our work, to ensure the issues with which we engage are consistent with the charism and spirituality of Franciscans everywhere. We continue to be guided by these values in our work today.

During this Lenten Season, we seek to delve deeper into our Franciscan Values and have created this video series to share. Each week, we will add a new video recording of a staff member or FAN friend focusing on one value statement and pairing it with a short prayer.

We urge you to take a moment today and spend it in prayer rooted in one particular principle unique to our Franciscan spirituality.

1. Franciscans are dedicated to the care of creation, seeing all creatures as brothers and sisters.

Saints Francis and Clare had a relational understanding of creation. All creatures, from the smallest to “our Sister, Mother Earth,” are sisters and brothers, part of the very family of God. Because of this, Francis was named the patron saint of ecology by Pope John Paul II. Following this tradition, St. Bonaventure developed a theological and spiritual vision that acknowledged all creation as emanating from the goodness of God, existing as a “footprint” of God, and leading us back to God if we are able to “read” nature properly. He spoke of creation as the first book that God wrote.

St. Bonaventure wrote in Major Legend, Chapter VII, “This is the royal dignity which the Lord Jesus assumed when he became poor for us that he might enrich us by his want and would make us truly poor in spirit, as heirs and kings of the kingdom of heaven. I do not wish to relinquish this royal dignity.”

Value #2: Dignity of the Human Person

2. Franciscans emphasize the dignity of the human person, especially in its social nature.

Although all creation is the “footprint of God,” the Franciscan tradition understands that human beings are also created in the very image and likeness of God. Humans represent in a special way God who is Trinity, and therefore we achieve our personal fulfillment in relationship to God and in community rather than in the isolation of individualism.

The Papal Decree of the Canonization of St. Clare describes “Her life was an instruction and a lesson to others: in this book of life some learned the rule of living, in this mirror of life others learned to behold the paths of life.”

Value #3: Dedication to a Consistent Ethic of Life

3. Franciscans acknowledge that life is sacred and are dedicated to a consistent ethic of life.

Since life is the first gift given us by God, Franciscans have a profound respect for human life. The itinerancy which is part of the Franciscan vocation helps the followers of Francis and Clare understand better the fragility of life and to support the most vulnerable in society. Because of this, the Franciscan family, from its earliest moments, embraced active non-violence and articulated a theology and ethics centered in love. This spiritual perspective includes respect for those who disagree with us, as shown in the dialogue between Francis and the sultan.

St. Francis, in his Testament, states, “When I was in sin, it seemed too bitter for me to see lepers. And the Lord Himself led me among them and I showed mercy to them. And when I left them, what had seemed bitter to me turned into sweetness of soul and body. And afterwards I delayed a little and left the world.”

Value #4: Genuine Love and Respect for the Poor and Vulnerable

4. Franciscans witness to a genuine love and respect for the poor and vulnerable.

For Francis, poverty involved not only serving the poor but being poor and connected to those who were poor and outcast. This service to and identification with the poor was at the heart of the lives of Francis and Clare, it is there that they discovered Christ as “thepoor Son of the poor Mother.” Following the example of these saints, members of the Franciscan family today are called to be with and identify with the poor and vulnerable and with all who face discrimination of one form or another. We are called to be insolidarity with them in their struggle to have their God-given rights honored by others. We are called to develop a lifestyle that brings us close to the poor and makes us sensitive to those who are most vulnerable.

“Francis went around the cities and villages, proclaiming the kingdom of God and preaching peace.” Thomas of Celano, The Life of St. Francis, 34.

Value 5: Franciscans are heralds of peace and reconciliation

5. Franciscans are heralds of peace and reconciliation.

In his Admonitions, Francis explained that “those people are truly peacemakers who, regardless of what they suffer in this world, preserve peace of spirit and body out of love of our Lord Jesus Christ” (#15). His greeting to all, still repeated by Franciscans today, was “Pax et bonum,” “peace and all good.” Franciscans are called to build peace in their personal lives and in society. As mentioned above, such a lifestyle involves an attitude of active non-violence.

Value 6: The Franciscan vision stresses the right relationship of justice

6. The Franciscan vision stresses the right relationship of justice.

From the very beginning, Franciscans were seen as fratres (and sorores) minores, lesser brothers (and sisters). The Franciscan tradition emphasizes a genuine meeting of justice and charity. Franciscans do not try to domesticate the prophetic words of the Gospel but rather are called to live out a renewed vision of life and relationships based on justice. Like all Christians, Franciscans are called to read the Signs of the Times, critique abuses of power, and follow an ethic based on the inviolable dignity of all people.

“In his own opinion he was nothing but a sinner, though in truth he was a mirror and the splendor of holiness. As he had learned from Christ, he strove to build himself upon this like a wise architect laying a foundation.”
—St. Bonaventure, Major Life, Chapter VI

7. The Franciscan vision is transformational, demanding change and conversion in its adherents, following the example of Saints Francis and Clare.

7. The Franciscan vision is transformational, demanding change and conversion in its adherents, following the example of Saints Francis and Clare.

A favorite saying of St. Francis was, “Let us begin, for up till now we have done nothing.” Francis saw his entire life as a continuing conversion into the vision of God, whom he saw as a loving parent. Francis saw his life as a continuous conversion from sin to a life lived in gratitude for God’s love. Many described the conversion of Clare from “the good to the better.” The Franciscan life today remains one of on-going conversion. There is always an unfinished quality to this conversion until we enter into the Reign of God.

“He gleamed like a shining star in the darkness of night and like the morning spread over the darkness. Thus, in a short time, the appearance of the entire region was changed and, once rid of its earlier ugliness, it revealed a happier expression everywhere.”
—Thomas of Celano, The Life of St. Francis, 37

8. Franciscans are called to be agents of change in the larger community

8. Franciscans are called not only to change themselves but also to be agents of change in the larger community.

Francis began his conversion in the Church of San Damiano, when he heard the crucifix challenge him, “Francis, repair my house, which as you see is falling into ruin.” Throughout the course of his life, he realized that the “house” that was in need of repair was his own contemporary society and Church. Today Franciscans are still called to evangelize by their example, both in society and in the Church. Following the examples of those who have gone before us, we accomplish this task in a spirit of service and humility, giving “testimony in word and work that there is no all-powerful one but the Lord” (Letter to the Whole Order, 9).