DREAMERS Continue to Vigil in Front of White House

It is nearly 2 weeks since the Dream Action vigil began in front of the White House. The vigil-ers are tired, but remain passionate, courageous and hopeful. Each day, they stand, pickett, bang drums and talk with passers by about why they are there.

The deadline of September 5th given to the Trump administration to end DACA is rapidly approaching. In the final days leading up to this deadline, the various faith organizations which have been supporting the vigil-ers have proposed a week of fasting and prayer. From August 30 to September 5, we will be fasting, praying and continuing to bring attention to DACA and TPS.

The National Korean American Service & Education Consortium (NAKASEC) has been the driving force in this vigil and they have developed a petition urging the President to protect DACA and U.S. Congress to pass the DREAM Act.

To show our support and faith in these young people, we urge our members to carry out these two actions:

Our Catholic faith and Franciscan spirituality teach us to stand with and welcome the stranger. We will not be bystanders while families are torn apart.

Last week, over 2,000 immigrant youth and allies from across the country began a 24-hour a day, 22-day picket rally outside the White House to gain the attention of the Trump administration and demand protection of the Deferred Action for Childhood Arrivals program (DACA) and the Temporary Protection Status (TPS) programs. The Franciscan Action Network (FAN) has been a part of the planning process from the start and has spent the last week organizing hosts for twice daily prayer vigils, getting other faith leaders involved, keeping track of food donations for the vigil-ers, and generally supporting these young, courageous friends.

To celebrate the 5th anniversary of DACA on August 15th and as part of the kick off of this prolonged event, a number of allies were arrested for nonviolent civil disobedience, including FAN executive director, Patrick Carolan.  At the closing prayer vigil that evening, Patrick spoke, saying “I once asked my immigrant mom why she left Ireland and she said ‘I had a dream that my children could have a better life.’ Our Catholic faith and Franciscan spirituality teach us to stand with and welcome the stranger. We urge our leaders to remember that the Earth and all that it holds are God’s and we are all immigrants in God’s land. We will not be bystanders while families are torn apart.” 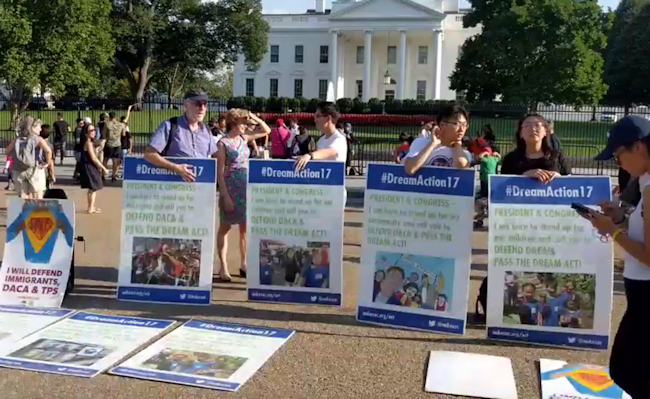 The round-the-clock presence will continue until September 5th, the deadline given to the Trump administration from Texas Attorney General Ken Paxton and nine attorneys general from other states to end DACA. We urge our members, community and individual, to sign on to the Faith With Dreamers letter which demonstrates that elected officials, law enforcement, faith, and civic leaders stand with these young people and want to preserve the DACA program.

We were thrilled to see the op-ed in the Hill by Archbishop Wester of Santa Fe on the importance of DACA and its fifth anniversary. Please take a moment to sign up to pray for these youth. They are young, passionate believers and they need our support and assistance.

FAN is proud to support our immigrant and refugee brothers and sisters. We will continue working with partners towards comprehensive immigration reform, such as the bi-partisan DREAM Act.